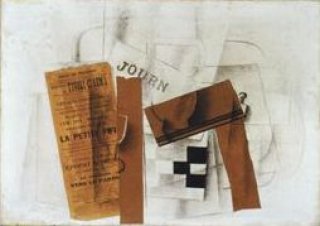 In 1911, Braque started to introduce letters and words into his compositions, first as stencils, then rendered freehand. Picasso was soon doing the same, and Cubist compositions began to fill up with texts derived from newspaper mastheads, bottle labels and the typography of musical scores.

A few months after the appearance of these painted verbal signs came the collages, in which actual pieces of newsprint, real labels, and advertisement, calling cards, tickets and various other extraneous elements, such as wallpaper, sandpaper and cigarette butts, were glued to the surface of the canvas or paper.

Rather than seeing this texts as things to be read, Braque said he intended them to serve a purely format purpose, as compositional devices or spatial figures that draw attention to the textuality of text and highlight the visible nature of writing as a graphic mark. 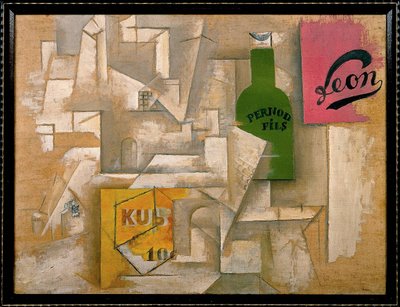 Although texts in Cubist works might invite readership, what kind of relationship do the fragments actually establish with the viewer/reader? Are these texts meant to be making specific commentaries on the social lives of the artists? Or, when they refer to the context of current events –political, social, economic—is some implied or explicit judgment then being made by the artist?

If we acknowledge that the various texts are in some way voices, then who exactly can be said to be speaking? Do the often multiple fragments of newsprint, the headlines, denser areas of type and advertisements add up, perhaps to a cacophony of voices, to raucous arguments, heated debates, or intimate conversations taking place in a café or studio? 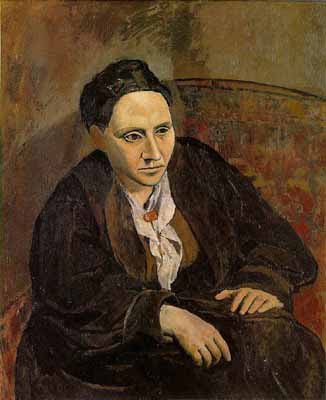 Stein liked Picasso's Portrait but said it didn't look like her. He told her she would grow to resemble it.

The poets generally associated with Cubism are Guillaume Apollinaire, Jean Cocteau, Max Jacob, André Salmon and Pierre Reverdy. As American poet Kenneth Rexroth explains, Cubism in poetry "is the conscious, deliberate dissociation and recombination of elements into a new artistic entity made self-sufficient by its rigorous architecture. This is quite different from the free association of the Surrealists and the combination of unconscious utterance and political nihilism of Dada."[11] Nonetheless, the Cubist poets' influence on both Cubism and the later movements of Dada and Surrealism was profound; Louis Aragon, founding member of Surrealism, said that for Breton, Soupault, Éluard and himself, Reverdy was "our immediate elder, the exemplary poet.

Wallace Stevens' "Thirteen Ways of Looking at a Blackbird" is also said to demonstrate how cubism's multiple perspectives can be translated into poetry. 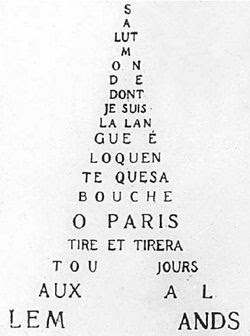 No posts.
No posts.
Home
Subscribe to: Posts (Atom)

Glass and a bottle of Suze - Picasso 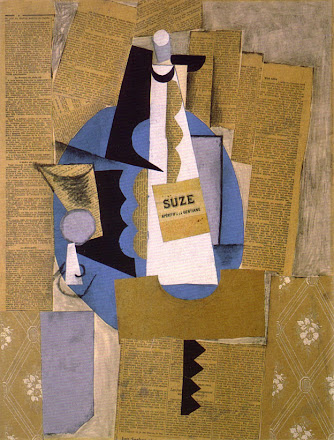 Pablo Picasso's La Bouteille de Suze is a key image of the late Synthetic Cubism developed by Georges Braque, Juan Gris, and Picasso, in which the artists synthesized separate elements from real life in their pictures to suggest objects and environments. In La Bouteille de Suze, Picasso used cut fragments of newsprint, wallpaper, and construction paper, as well as gouache and charcoal, to suggest a liquor bottle with a label and, on the left, a glass and an ashtray with cigarette and smoke. These abstract, fragmented elements all appear to rest on a blue table in front of a wall with diamond-patterned wallpaper and newsprint. Serving as a formal element, the newsprint also suggests the popular Parisian café activity of reading the paper while smoking and drinking. The texts add a political and social dimension to the image: they juxtapose newspaper articles referring to horrific events from the First Balkan war with stories of Parisian frivolity. Along with the texts, the distorted, fragmented forms in this Cubist image allude to such conditions of modernity as the lack of coherent perspectives or meanings in a constantly changing world.

If I Told Him-A Completed Portrait Of Picasso - Gertrude Stein

NOTES: If I Told Him A Completed Portrait of Picasso - Ulla Dydo

From 1906 on, Picasso was the great artist and the great friend in Stein's life. His portrait of her and hers of him joined his art to hers and hers to his as both were also joined in friendship. "Portraits and prayers," the phrase first used in An Elucidation, speaks of the juncture of the visual and verbal, painting and writing, Picasso and Stein.

In the powerful rhythmic construction of this portrait, the repeated questions and incomplete sentences question completion and refuse to name what history teaches. In the Autobiography Stein says that she delighted that summer in the waves on the shore at Antibes, where the portrait was written, as was Geography. The waves are more than background. Inside the portrait they become Picasso's creative energy; the conquering armies of the leader, whether Napoleon or Picasso; his power over the empire of art, which might yet, like Napoleon's, crumble; and the fickle sexuality, misogyny, and flattery characteristic of Picasso. Would he like it if she told him all this? Would he like it if she told on him? Would he like what she knows about him? Such questions, with their tone of gossip and threat, flattery and secrecy, are also never answered but persistently and rhythmically repeated.

For Apollinaire, language was something to be experienced for its concrete and graphic shapes, for its potential to convey meanings in other ways. Apollinaire insists on the `materiality’ of language, that is to say, its existence as visual marks of white on black or as patterns of sound.

In his later collection of poems, Calligrammes, Apollinaire incorporated words, letters and phrases into complex visual collages. The black on white of the printed page became a new field of experimentation. He experimented with a poetry in which a simple reading along the familiar linear axes (left to right, top to bottom) was no longer possible. The page became a sort of canvas for experimentation with different spatial relationships and with the possibility of multiple readings along different axes. 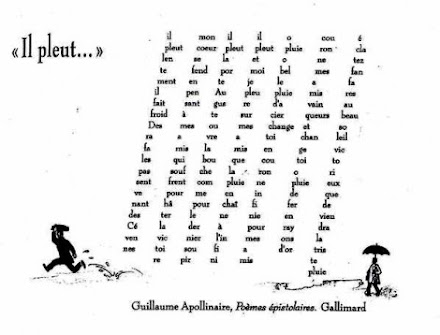 Shortly after his death, Calligrammes, a collection of his concrete poetry (poetry in which typography and layout adds to the overall effect), and more orthodox, though still modernist poems informed by Apollinaire's experiences in the First World War and in which he often used the technique of automatic writing, was published.

Concrete poetry or shape poetry is poetry in which the typographical arrangement of words is as important in conveying the intended effect as the conventional elements of the poem, such as meaning of words, rhythm, rhyme and so on.

It is sometimes referred to as visual poetry, a term that has evolved to have distinct meaning of its own, but which shares the distinction of being poetry in which the visual elements are as important as the text.